Dulwich Village had the road closed for a village festival. You wouldn't think that you were in London rather than in some little village in the country. We enjoyed cakes from the Heart disease stall, watched the prams racing and listened to the Dulwich Ukelele Club - pretty good stuff.

Update:
David Mulany, the organiser, directed me to these wonderful photos of us dancing at the festival taken by Mary Linley (link to her Flikr photostream of the festival) 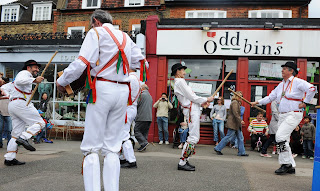 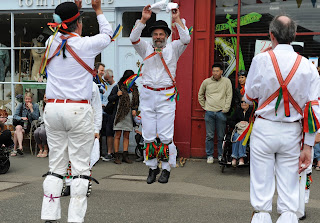 Posted by Peter Kanssen at 10:51 pm No comments:

Just around the corner from the Little Venice Canalside Cavalcade
we danced at the Prince Alfred in Formosa St and the Warwick Castle, once again joined by Thames Valley Morris Men - thanks for joining us guys it was a lovely evening.

We tried to tempt a trombone player for the BBC symphony orchestra into the dark art of playing for folk dance
Posted by Peter Kanssen at 10:38 pm No comments:

Some of us have our third badge for being regular attendants - they give them to the children to commemorate their visit to the troupe. They've invited us along fro St George's day/ Mayday festivities and it goes down well.
Posted by Peter Kanssen at 10:31 pm No comments: 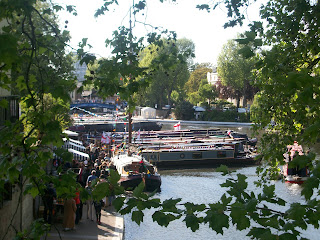 A lovely sunny day and a good start to our season, with Thames Valley Morris Men joining us. we started off by the beer tent which seems a good idea. I liked the "Worcester Sauce" beer particularly.
The Cavalcade is the largest get-together of canal boats in the country, they were having manoeuvring competitions in the triangular space of the Little Venice dock
There may be some photos of this from James, who took some, when he gives me them I will edit them in
I am proud to say that there was dancing to me playing Barry's Hurdy Gurdy, which I am learning.
You can see the brochure for the festival here
Posted by Peter Kanssen at 10:27 pm No comments:


So a few of us went up to Camden to some studios and were filmed doing a stick dance.
we kept drifting to one side which was a mystery, till we noted that we were lining up on John playing his concertina rather than the camera - instinct of years dancing rather than it being a sloping studio


I thought I had a photo from as we emerged from the studio but if you picture 5 morris men surrounded by loads of complicated lighting equipment projecting a rosey background behind us.


Hopefully one day we'll get to see the promo, or maybe it's a station ID or whatever.
Posted by Peter Kanssen at 9:54 pm No comments:

A while ago... but I'm getting up to date.
London Pride always has it's annual feast on the first Saturday of December
2010 was no exception
we also combine it with our AGM and a bit of dancing.
I'm sure there must a have been some suggestion that an up-to-date blog might have been a good idea. and something about Facebook??
Barry's arm got twisted to being joint bagman, and Jeremy's into being joint squire. all seems to have worked so far (5 months later). I'm quite relieved not to be doing all the chasing etc. and Barry's excelling at it...

We were dancing in the Primrose Hill Community Centre. for our feast we dance for ourselves. in kit. so it's possibly the same idea as an American convention ( not that I've ever been to one)

After dancing we broke with the last few year's tradition by going for a meal in a pub, the Prince Albert where we often go after our practices. (For a number of years we self catered! - quite handsomely). It went down very nicely and we toasted absent friends, the Queen and the immortal memory of Cecil Sharp, which we traditionally toast with a loving cup of wine and spices secret recipe passed down from times immoral,  passed around in a Mazer made for us in the 1960's with ancient rituals of guarding the drinker from attack.
Posted by Peter Kanssen at 9:24 pm No comments:

We danced at the grassy knoll in the children's area again, a relaxed end to our season's dancing, before going back to Cecil Sharp House for Autumn and Spring terms for our practices
Posted by Peter Kanssen at 9:12 pm No comments:

there's been a bit of a hiatus on bog posts - sorry

Normal service will be resumed as soon as possible
Posted by Peter Kanssen at 8:50 pm No comments: