Sophie Countess of Wessex Opened for us...

... though we didn't actually meet her.

Last night we were at the Summer Fete at Dolphin Square in Pimlico, the biggest mansion block development I've ever seen. 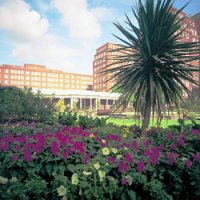 A thousand flats, and the home of celebrities including Harold Wilson and Mandy Rice Davies, it has a very nice garden which yesterday, had a marquee, refreshments and a bunch of residents enjoying themselves. 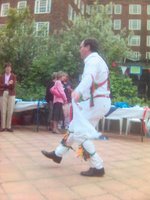 Sophie opened it at 3pm, so she was gone by our first spot at 7.30. We didn't meet her, but we did catch up with our old friend and international Morris celebrity (he's toured abroad), Bruce Clitherow. 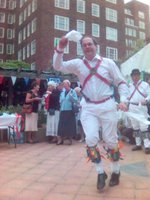 He's in fine form!
Posted by Peter Judge at 3:42 pm No comments:

Islington: Surestart, the adventure playground... and the robot horse

Two places to dance in Islington, on a sunny Saturday (10 June).

We started at Mildmay Surestart's Summer Fair, on Newington Green. The show coincided with England's opening match against Paraguay, but despite this we had an audience.

Given the football, and the fact that Surestart is the Government's programme to support young families, the crowd was about 95 percent female.

A very hot day, so we had two short performances, and lots of tea in between. There was fine curried goat, available from a woman who remembered us from a previous Canal Festival - her son was the four-year-old who was determined to join in outside the pub in 2004, remember him?

At the opportune moment, Jeremy announced "I've got another place to dance at, it's just round the corner," and managed to whip up a small amount of enthusiasm. Well quite small in fact. He cycled off with one other man - me.

I was glad I went. It was a fundraiser for the Hayward Adventure Playground, which caters for children with disabilities. When we arrived, they were being entertained by a man juggling with a chainsaw ("don't try this one at home"), and a band was warming up in the background. There was more tea, and very nice banana cake.

Pretty soon there was a suitable spot for a solo jig, and then some hanky-waving action with all the children chasing round.

And then the mechanical horse arrived. The children shrieked, but Jeremy seemed to get on quite well with it. My day was complete.

Posted by Peter Judge at 5:25 am No comments:

Quite a multicultural event. While we were waiting for our spot there was a band playing something that reminded us of west african music.
A bit of bopping to the music went on: 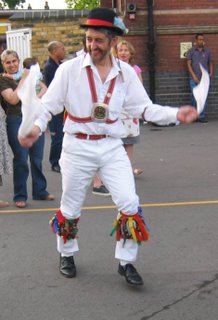 It made me wonder if Will Kemp had been dancing to Soca? 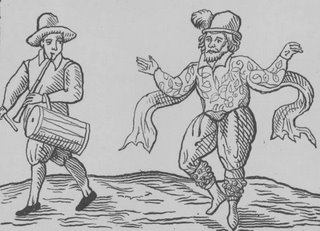 I'm afraid I haven't photos of us in action as there was only 6 of us including Nick, who was playing Melodeon and dancing in the set at the same time!

The light was fading afterwards, blurring my photos: 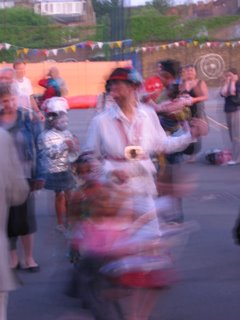 There was also some sumo morris: 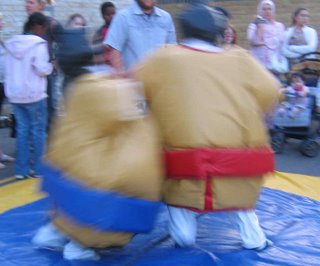 Posted by Peter Kanssen at 10:14 pm No comments:

A warm evening, and a nice audience in two public spaces in Notting Hill - followed by a meal at Peter K's work. 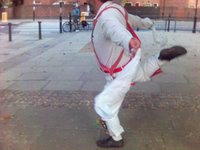 This clip gets the feel of it - Peter's residents sitting on the wall, one gent joining in with gay abandon, and three girls 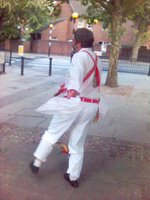 skipping round us, and the piercing tones of Jeremy's sax. Public Morris as it should be! 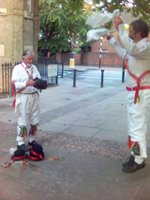 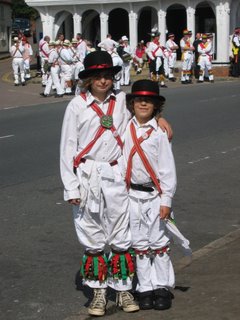 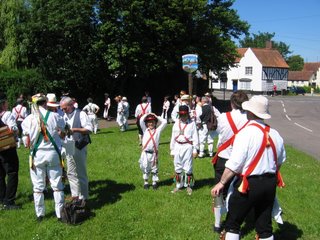 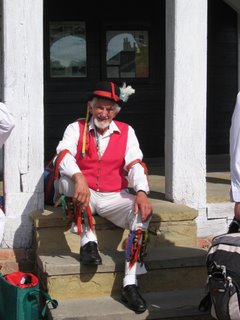 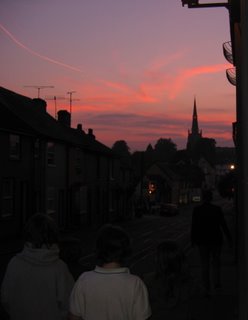 We had a lovely weekend at the Thaxted Ring meeting.
London Pride did a show dance in the square, at which the squire of the Morris Ring introduced Noah and Ezra, our two newest recruits. It probably would have gone better if I'd remembered to call the dancing, but the audience kindly didn't seem to notice.
We were actually a full side of London Pride dancing, though half of the men were in Cambridge MM kit.
Posted by Peter Kanssen at 12:36 pm No comments: