Time to start planning the feast. It will be on Saturday 3 December.

I assume that we'll be doing something like what we've done in the past - but any comments and suggestions are welcome.

I've just discovered that I won't be at many practices this term, owing to pantomime rehearsals.

Peter
Posted by Peter Judge at 2:28 pm No comments:

The audience at the Queen's Larder were less friendly than they have been, and apparently the new landlady is not yet aware of the vast asset that our twice-yearly visits represent (Lynette put her straight on that).

Still with an excellent turn-out (everyone shows for the last dance of the season), we danced to moderate enthusiasm crossed with indifference from a rapidly changing crowd.

The second stand at the Nofolk Arms was a much better event. As usual, there was almost no one about in Leigh Street, which looks a bit bleak and forbidding, but people who actually live there materialised as if by magic.

A chap who's seen uas there before was enthusiastic, to the point of almost volunteering to come to practices. Other people asked about the meaning of it all. Visitors from other countries joined in (I can't remember where they were from though).

We celebrated the Ashes win, of course, with a "balance the straw" danced to Waltzing Matilda. I don't go in for this sort of jingoistic hollering as a rule, but could see the attraction of singing "Who won the ashes? We won the ashes! La lalala lalala lalala."

Another lady told us it was the first time she'd been cheerful for a year - which somehow makes it all worthwhile.

There was food too, courtesy of Allan visiting Tesco.
Posted by Peter Judge at 10:46 am No comments:

Here's some photos of us dancing in the Blue Peter Gardens on May day that Ezra took: 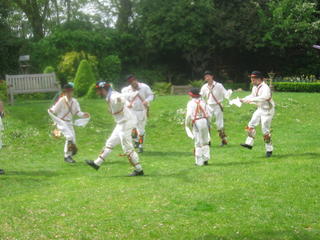 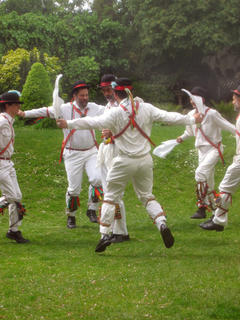 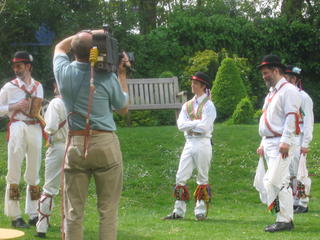 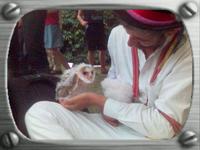 Possibly my favourite show of the year. this year was our third outing to the Angel Canal Festival, and the 20th year the Festival has happened.

The first Sunday in September, the towpath at the Angel is lined with stalls. There are boat rides and canoes to try, second-hand books, food and other things. Including Morris of course.

This year, London Pride were upstaged young Bollywood dancers, the excellent continental busking of the Tragic Roundabout and, as you can see, cute baby owls. Despite that, we did our bit, performing three shows, at two spots either end of the festival.

Apart from the owls, the highlight was the encouraging audience. Some of them were ready to join in, especially some of the smaller ones who wandered in when they felt like it.
Posted by Peter Judge at 7:24 am No comments:

We're back at the URC Hall in Wakefield Street for regular Monday practices, at the back, beyond the psychological self-help classes.

So far this term, we've danced Fieldtown and Bampton, and welcomed one new dancer.
Posted by Peter Judge at 7:14 am No comments: