Video of Ezra dancing the Rose

Here's a video of Ezra's first dance out - The Rose

(sorry, it needs Quicktime 7 and I haven't sussed how to embed the video in this page yet)

Posted by Peter Kanssen at 11:27 pm No comments: 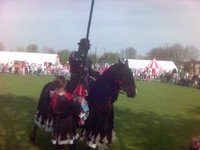 Well, who would have thought, our newest member would be the "dashing" Count Adhemar of Acquitaine, seen here wearing the distinctive London Pride bowler?

On Saturday we started the dancing season, performing at a St George's Fayre, at The Park Club - a health club in Acton.

Further up the bill were the New Scorpion Band. They're not, as one might suppose, a tribute band for the well-known German heavy metal band, but a lovely acoustic folk band.

Also on the scene were the Knights of the Damned, a jousting stunt team. Count Adhemar, the Black Knight won my favour, and honoured me by wearing the black bowler, before competing in the lists. I thought that "favours" were really a sort of courtly love thing, but obviously, the Kinghts are more broadminded than you might have expected. Anyway, I'm a sucker for the glamour of evil.

We danced two sets, with three Kanssens in the team. Noah and Ezra got plenty of dancing in, in fact we relied on them, since the day coincided with a London Pride club weekend elsewhere...
Posted by Peter Judge at 4:47 am No comments: