A wave of Morris enthusiasm greets our new term

We moved into Cecil Sharp House on Tuesday nights - just as the Morris Media Frenzy hit. Peter, Michael and I have all been interviewed for the radio, along with - it seems - just about every dancer in the country.

The practical result has been a lot of new dancers showing up at Cecil Sharp House, and converging with us and a solid group who have been learning under John Russell (form the the Beaux of London).

London Pride members have been joining John's group, as well as having our own fortnightly practice alongside. For me, John's sessions have been the biggest, most engaging and most energetic morris practices I can remember. Tuesday night saw up to 24 dancers learning Adderbury Lads A Bunchum, along with Headington Bean Setting and Trunkles, and the Fieldtown Nutting Girl jig.

Into the national publicity, comes the movie, Morris: A Life With Bells On. A gentle British comedy about a somewhat fantasised world of Morris dancing - it's struggling to get distribution, but is visible in several village screens in Dorset. A campaign is underway to get it screened in more places! 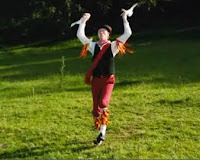 Well, it's a slow news week. There's only the end of the financial world to report, so what else should we have but a burst of reporting on the "death of Morris".

The Morris Ring sent out a Press Release in December which they thought had "sunk without trace". That was until Monday, when stories started appearing in the Times and the Telegraph and then all over.

The release said Morris could be "extinct" in 30 years. The Federation and the Open Morris, and pretty much every dancer in the land jumped up to say No Way, and by and large the media took them at their word.

I had an email read on the PM programme, and then appeared on the Jeremy Vine Radio 2 show with Kitty - following an excellent turn by Simon Care of Moulton. Meanwhile Peter Kanssen was on Radio 6, and then on local London Radio.

I then had a call from a non-flappable Mail journalist, whose leisurely feature for Saturday's paper had been suddently rescheduled for tomorrow - given the urgency of the news - giving her a three hour deadline to fill.

Our message through all these outlets: we're not extinct, we practice in Cecil Sharp House on Tuesdays, and all are welcome.
Posted by Peter Judge at 3:36 pm No comments: