Morris As Comedy - Some Common Threads

A couple of weeks ago in a Soho junk shop, I found two books of comic strips of The Cloggies, the classic Private Eye comic-strip clog dancing dating from the 1960s. A favourite strip is on the left. After practice, we noticed a couple of things about it

All three things are also true of last year's Life With Bells On movie. So I wonder if there's a reason Morris (or clog) has to always be that way in any comedy production, regardless of what medium, whether strip or film.

Certainly bells on the arms look good visually (even if they don't add much to the sound) and in any fantasy where you don't actually have to perform, a musician can be a needless complication. And Morris is an anarchic activity which shows up well when set against authority figures

One other thing I found on the Cloggies' Wikipedia page, is that there was actually a real side called the Cloggies, formed in tribute to the Bill Tidy cartoon. Their finest hour, bringing to a close a student performance of John Milton's Comus, got a snotty review from the Guardian theatre critic, which the lads quite rightly regarded as "a complete vindication of all they had stood for". 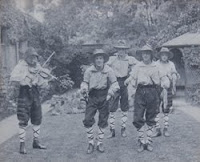 Comus, of course, is the perfect vehicle for any celebrity Morris, as it was performed in Cambridge in 1908 by a team (left) including the poet Rupert Brooke and the mountaineer George Mallory (more details here).
Posted by Peter Judge at 6:11 pm No comments: