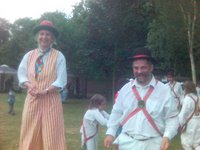 Holland Park had a marquee, a steel band, a barbecue, the tenants and staff of Peter's project... and us.

Everyone else had a long presentation in the marquee, and emerged to head for the barbecue. This gave us a nice audience, albeit one with its mind on food, not us.

We were joined in Bonny Green by Sarah Carrot, of the Moon Carrot circus skills team (who also did a great job keeping some of the LP kids occupied). As you can see, she is very tall. She did a fine performance - not at all stilted - but I only managed to snatch a poor photo before we started....
Posted by Peter Judge at 11:20 am No comments: 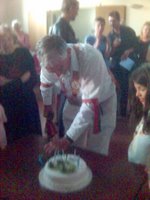 Two of our men had birthdays recently. John and Jeremy Monson are 80 and 50. So we had a celebration in the Harpenden village hall, with music, country dancing, food and drink.

I'm sure there are more photos of the occasion, but here are some blurry ones of the birthday boys cutting their cakes, using the official London Pride Cake Sword (a nineteenth century cavalry officer's blade, I understand).

People from at least three generations had a good time, with country dancing for as many as willed, at all standards.

I will remember the sight of Peter K, partnering Noah and dancing the woman's steps. Very dainty. 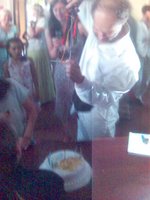 At one point, a circle dance left Peter waltzing with John, both in kit. It made me wonder. How about a whole 3/4 Morris tradition, developed by itinerant Austrian musicians, and only just re-discovered? We could start with Sweet Jenny Strauss and go on from there...

Kitty and I stayed till the end, and went home on a train which stopped at West Hampstead due to engineering works (it was true, we could see they guys on the tracks).

We got in at 12.30. Alison said she hadn't expected to be waiting up for some disreputable guy to bring home Kitty from a party - at this age.
Posted by Peter Judge at 10:12 am No comments:

No photos for this one (I forgot my phone) unless someone else wants to edit some in.

A highlight of this evening was the presence of James Denny, melodeon player for Thames Valley. He pitched in to play for some dances, as we were somewhat short of numbers for the first stand at the Anglesea Arms - until Jeremy arrived.

This meant we had the pleasure of seeing John dance.

The Anglesea was a friendly place, as ever, with plenty of appreciative people outside. Another former dancer bumped into us, and passed on his wisdeom, as they do.

At the close of the show, about 100 people on roller skates shot past along Neville Terrace. We invited them to join in, but they said dancing was tricky on skates.

Some attractive American students took photos, and took a fancy to Antony.

The Surprise is in a nice secluded back street which is, apparently, afflicted with a curtain-twitcher. The pub has had a succession of landlords who have been persuaded to remove the outside benches, and the place seems depleted. The current landlord warned us we'd have to stop if there was a complaint.

There wasn't. Locals chaps joined in, and kids on bikes cycled past, mocking us good-naturedly. We put on a wider range of dances, still with support from James.

We ate sandwiches and chips and wandered home. Pretty much the definition of a good evening's Morris.
Posted by Peter Judge at 7:03 am No comments: