Dancing for "Hugh the Drover"

We'd been approached earlier in the year by Angela Hardcastle, who was directing the Hampstead Garden Opera's production of Vaughan William's opera Hugh the Drover.
It was a crucial part of the plot - morris dancers come on stage and beguile the company leaving Mary alone to contemplate why she was marrying the bully John the Butcher. London Pride shared the role with Thames Valley and Greensleeves.
It's quite different seeing opera up close - the Gatehouse pub theatre only seats 100, and the cast gave their all.
I came back midweek to see the whole thing. Terrific stuff., 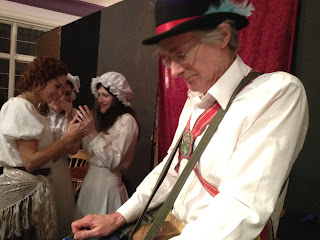 Here's Barry trying out the controls for the Horse (lent by Thames Valley) - a wondrous beast that could roll eyes, open and shut mouth and stick tongue out and wiggle ears. One could get carried away...

[Peter J adds:] Hugh the Drover is a very interesting opera, and I enjoyed this review in Opera Today, which doesn't gloss over its problems as theatre, but compares it with the incredibly-successful Cavaleria Rusticana.
It seemed to me that Hugh has masses of action and interest - bare-knuckle boxing, Morris and an effigy of Napoleon - all put together with lovely tunes. The story and the view of Merrie England might not appeal in a serious professional production (so Hugh never gets done at the serious opera houses) but it is perfect for a no-less-serious amateur show.

These people threw everything into the show. A cut-down orchestra and a chorus "singing their socks off" filled the room with an overwhelming wall of sound.
These two phone-pictures don't convey much except the amount going on on stage....

With a rotating cast of Morris men, we didn't get to dance in the dress rehearsal - we just rehearsed our steps in a break between other bits of rehearsing. This meant I could sit back and watch the whole of the first act rehearsal (with the Morris part taken by Greensleeves), and it was all marvellous.

Posted by Peter Kanssen at 9:23 pm