Posted by Peter Kanssen at 10:27 pm No comments:

At the Anglesea Arms, and then the Scarsdale Tavern in Edwardes Square
the weather had been threatening downpours all day, but the magic of the morris kept it away, and we had a nice evening's dancing. And pleasant audiences too. Posted by Peter Kanssen at 10:17 pm No comments:

at the Norfolk Arms and Rugby Tavern (sorry I only had my camera out at the Norfolk Arms)
we were joined by Dan Kenning, who is now working in these part, but work is too busy to bring whites too :(
The Norfolk Arms is quite a gastro-pub these days, but the patrons still enjoyed the show, as did a coach-load of american tourists, before going off to investigate the darker recesses of London 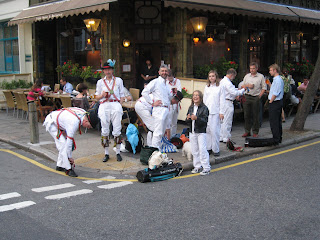 Myrtle came along as official morris-beast-in-training 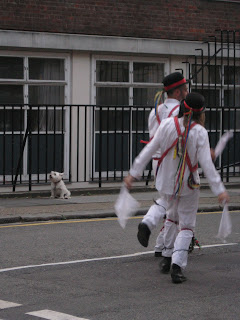 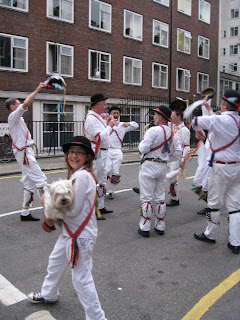 after that over at the Rugby tavern. It was the barman's first day, poor thing, and I've been very lapse lately in warning pubs we were coming. He was getting worried that he'd lose his job by the pub losing it's licence on the first day he'd worked.
We reassured him that Morris wasn't included in the music licensing laws "because it isn't entertaining" (?)
and even more:
that the chances of us still noisily dancing after 10pm were fairly slim....
Posted by Peter Kanssen at 10:03 pm No comments: