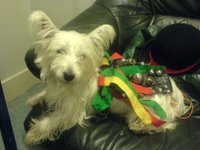 She's turned up to one practice, and appears to tolerate Morris - and there are some would say that's as much as we can expect from anyone. And it's about time we had a beast.

Is it a a dangerous warping of Morris tradition, to have a female animal? I don't know, but a more serious objection would be that she's better looking than any of us.

(I should say, those bells aren't attached. Yet)
Posted by Peter Judge at 7:36 am