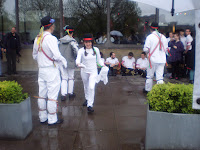 It was British Folk's finest hour on May 2, as Folk Against Fascism celebrated on the South Bank, at the Queen Elizabeth Hall.
We were there, being happily outdanced by the energetic Nonesuch from Bristol, by Thrale Rapper, the wondrous New Esperance, and the Belles of London (suffering from injury and the loss of a Top Hat, after mingling with Tories on St George's day).
This picture tells you all you need to know about the outside dancing conditions, and our battery ran out after this...
Among other things, the day included great cakes from the Women's Institute, a rare, sweaty and high-powered ceilidh from the Oyster Ceilidh Band (and another with Old Swan), and an evening gig of politically-motivated (* see comments below) folk.
It all stemmed from the BNP's ill-judged efforts to co-opt folk into their vision of British-ness. British folk may be British, it may even be patriotic at times, but it's not xenophobic. Take that, Nick Griffin!
Posted by Peter Judge at 8:32 pm

To clarify .. it was Old Swan Band, not Black Swan (which is a rapper side from York). And the evening was not politically motivated folk. The core programme of songs was traditional ... a determined declaration to the BNP that these songs belong to all of us and are not the expression of some ill-conceived white nationalist agenda!
It was great to see London Pride's support of the event and I hope that the rain didn't put you off.
Derek Schofield

I've changed the band name - I don't want to misattribute one of the best ceilidh bands in the country!

And I appreciate what you say about "politically motivated folk". The gig was just good music - party-time, not party-politics!

Many thanks to FAF!