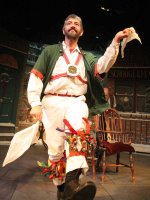 For the next week and a bit, Peter J can be seen dancing on stage, nightly, in the South London Theatre's production of A Christmas Carol.

We're talking chocolate box production, a cast of thousands, and fabulous costumes - including the jingling jacket knocked up by wardrobe. The director thought plain whites would be too pristine and we needed some green to go with the production.

I asked for a tattered jacket, and got what you see - a shirt with bells on. It's murder trying to put it on and take it off quietly, backstage. I'll bring it on tour next year perhaps!

Many thanks to the excellent James Denny of Thames Valley Morris Men, who plays a variety of squeezeboxes throughout the production, and persuaded the director to put the dance into the show.

There are more photos here.

This was a dress rehearsal. Before anyone asks, for the actual shows, I have been wearing white socks!